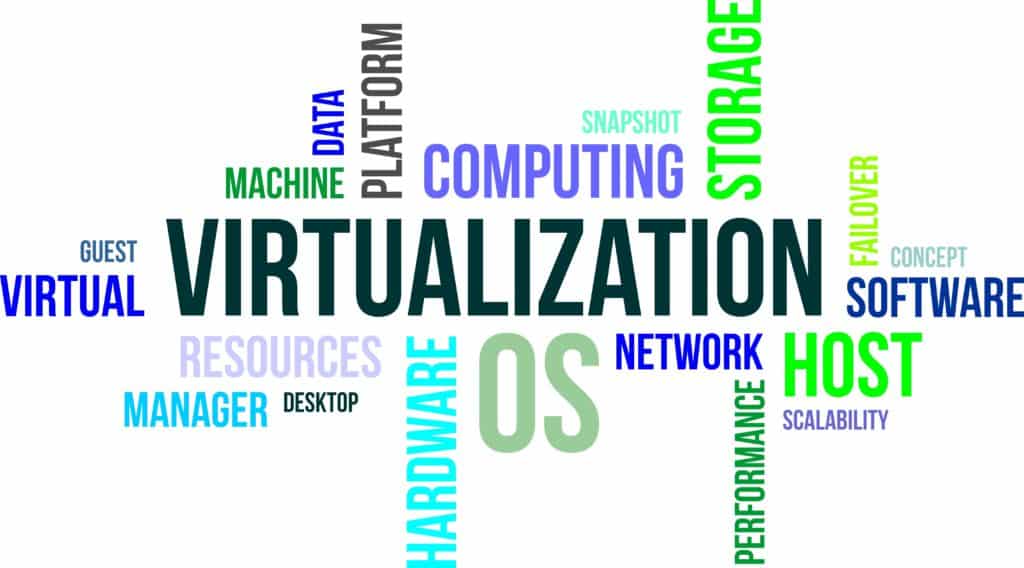 One of the advances thanks to cloud technology has been the virtual machine (VM). Just as cloud versions of software, like Microsoft Office, bring that program into a cloud accessible environment, a VM brings your computer into a cloud environment.

These are also commonly known as virtual desktops and they allow a person to access an entire computer environment (operating system, settings, files, etc.) from any device and any location.

Multiple VMs can be hosted on a single server and using them instead of hosting everything on a physical computer is becoming more popular for several reasons.

80% of surveyed organizations say they prefer cloud-based technologies due to the improved operating efficiency.

Some of the benefits of working with virtual machines and putting computer environments in the cloud are:

There are times when major changes are being made to a virtual machine. A company may want to try out a new custom software or implement automated security policies. If something goes wrong, it’s smart to have a way to revert a VM back to a prior point in time (before the new measure was introduced).

Snapshotting is taking an image of a virtual machine at a certain point in time. It allows you to revert the virtual desktop environment to the state it was in when that snapshot was taken.

This could be helpful as a quick way to fix an update gone wrong, because you can rollback the computer instantly to a previous point in time.

A VM snapshot is NOT a backup, and it’s important to know that. If you use several snapshots believing that they are a full backup, you could be lost without valuable data in the case of a major problem.

Here are some of the important things to know about VM snapshotting.

VM Snapshots Are Dependent Upon Other Resources

In order for VM snapshots to do a full restore to a previous point in time, they access the parent VM disks or a chain of snapshots, if there are multiple. If the base disks with all the machine’s data are deleted, then the VM snapshot is not going to work.

This is why it’s important to back up data separately with a backup and recovery plan, so you’ll have that data when you need it.

Snapshots are Meant to Be Short Term

VM snapshots are designed to be short term, used for roughly 24-72 hours at most. If you keep too many snapshots around on your system for too long, you can begin to experience performance problems due to storage shortages.

A recommendation from VMware is that for best performance, you only use 2 to 3 snapshots at a time, and a maximum of no more than 32.

Data Becomes Read-Only When a Snapshot is Taken

Because snapshots are designed to be a frozen point in time on a virtual machine, any data that was writable becomes read-only when the snapshot is taken.

Additionally, the snapshot file cannot exceed the size of the original disk file. As mentioned, snapshots alone can’t be used to fully restore a VM state to a prior point in time and rely on the underlying data on the disk being accessible.

Take a Snapshot When the VM Isn’t Communicating

A snapshot will replicate the frozen moment in time for your virtual computer environment. Whether it was off, on, or in the middle of a communication with another computer.

To avoid potential problems when you revert to a snapshot, it’s best to take it when there is no communication happening between applications on the virtual machine and other computers.

For example, if you revert to a snapshot that was taken when an app was in the middle of a download, that download would try to resume, but there would most likely be confusion of the process and it would fail.

Snapshots have a specific purpose. If you do a lot of testing on your virtual machines or are going through a major environment upgrade or change, they are a very handy backstop protection to have to do a quick rollback should things go wrong.

But, if you aren’t doing anything major and using your virtual desktops on a daily basis as usual for normal business activities, then it’s best to not use the snapshot feature. Having it on and having snapshots continually stored can cause performance issues for your VM.

Get Expert Help for All Your Virtual Environment Needs

Contact us today to schedule a free consultation. Call 1-833-4-NEURON or reach us online.