Why It’s Vital You Keep Your Software & OS Updated 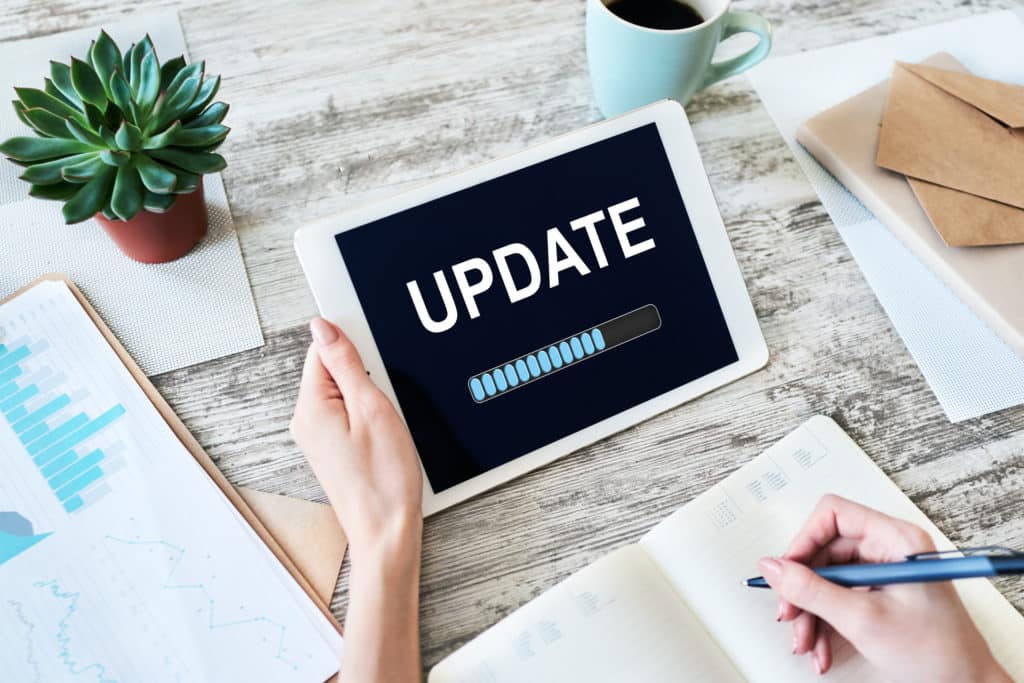 How many times have you clicked away a system request for an update on your computer? How many times do you think employees do the same thing on their work devices?

Updates can be annoying when they pop up right when you’re in the middle of a task, and they’re easily forgotten and put off. The user goes back to their tasks after clicking “later,” and everything seems to be operating as usual, so they might wonder if that update is needed at all.

But without those software, operating system (OS), and firmware updates being installed regularly, your device and entire network can be at risk.

60% of data breaches in 2019 were the result of unpatched system vulnerabilities.

Software vulnerabilities and bugs are a part of digital life. There’s a never-ending cycle between those that make the software and those trying to exploit it to gain access to a device and the data it holds.

As soon as hackers uncover a code vulnerability, the developer races to fix it and they issue an update for users that includes a patch to secure the problem. But users need to apply those updates for the patch to go into effect. And too many people don’t keep up with their device updates.

This is why many companies in San Fernando Valley use managed IT services that include patch and update management. This removes the potential for human error and ensures that systems are being kept updated properly.

Why Is It Important to Apply Computer Updates?

Wouldn’t it be nice if we never needed to update software on our computer or mobile devices? But then those devices would be stuck in time, never gaining new features and being left vulnerable to all types of threats.

Updates contain several vital components for an operating system, computer software or hardware. These include:

Here are several reasons that you need to ensure your devices are being updated in a timely manner.

Remember that big Equifax data breach from a few years back? It’s the one that exposed millions of consumer records with sensitive information. That breach happened because a hacker exploited a vulnerability in a complaint web portal. A vulnerability that had a patch issued for it months earlier, but the company never applied that patch.

The number one reason that all your devices need to have updates applied in a timely manner is to ensure protection against ransomware, malware, and other types of attacks.

Another code problem that software will have are bugs. These bugs may not be vulnerabilities that allow hackers in, but they could cause users problems when trying to use a particular software.

For example, an email program may crash when a user tries to search a certain folder, or a function in an application might not work as it’s supposed to.

Updates often include bug fixes to address these types of issues and improve the user experience.

When software isn’t being properly updated, you could be losing the benefit of enhanced productivity through new features.

For example, one of the last big Windows 10 updates included an enhanced “search anything” search box that shortens the time to find programs, documents, websites, and more.

Users that aren’t applying updates as they should, end up missing out on great new features that will make their workflow easier and that can significantly improve productivity for the better.

Another important function of updates to add compatibility for new hardware and software or new versions of applications. If you’re not regularly applying updates, you might find that you have trouble connecting peripherals, like a camera or printer, because your system hasn’t had a compatibility update applied.

Compatibility updates also include the ability of a software to use a new feature of an operating system. So, if your OS has been updated, but your software has not, then you could end up frustrated because a certain tool you expected isn’t available.

Technology is always evolving, so one or two missed updates could impact how your work applications connect and communicate and cause problems with data sharing and automations across apps.

Streamline Your Updates with Managed IT Services

Neuron Computers can help your San Fernando Valley area business with a trouble-free and worry-free update management plan, along with many other proactive IT maintenance tasks.

Contact us today to schedule a free consultation. Call 1-833-4-NEURON or reach us online.